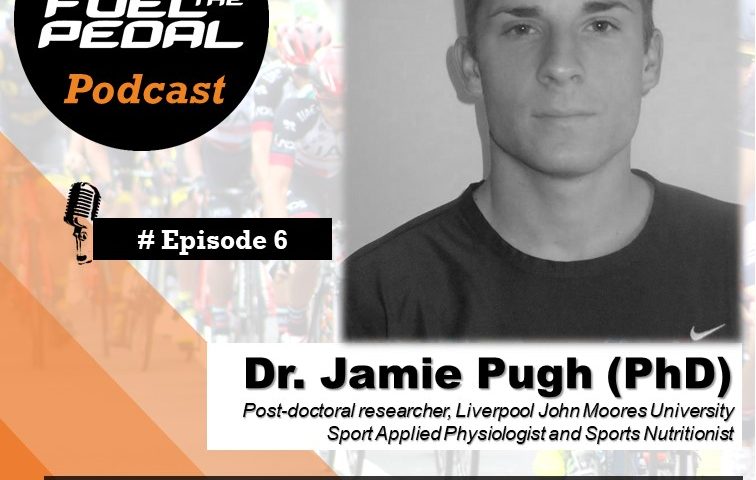 As Sports Nutritionists besides having to properly fuel cyclists during training and racing, there is also an additional challenge we often face. And that challenge is to try our best to minimize GI symptoms in cyclists. We can prepare a rider for months but if one key meal in a moment surrounding or during the race goes wrong, we can jeopardize months of preparation and condition the rider’s performance for that day.
On the other hand, we must make sure these athletes ingest a rather high amount of CHO-rich foods while on the bike in order to be able to sustain higher intensities in latter stages of the race. But this high exercise intensity and high quantity of ingested CHO are also some of the main factors that can also limit gastric emptying, CHO absorption and lead to some GI symptoms to occur, which may have serious consequences for cyclists.

Dr. Jamie Pugh (PhD) is a post-doctoral research at Liverpool John Moores University. During his PhD and current work, he has looked at the effect exercise can have on the gastrointestinal system and in more recent work, looked at the effects probiotic supplementation can have on endurance athletes. He has also worked as a consultant nutritionist and physiologist for a number of professional teams, marathon runners and extreme endurance athletes.

On this episode:
1. What causes GI symptoms to occur during exercise, and how do you quantify them for research purposes?

2. How prevalent are GI problems in cyclists compared to runners and how can they affect performance? In which part of the race would the symptoms be more likely to appear?

3. Are there some nutrients or food components that may have a larger contribution to the appearance of GI Symptoms (e.g. FODMAPS, foods high in fiber, fat, protein…)

4. Current guidelines advise us to eat 1-4g/kg/CHO in the 1-4h in the pre-race meal. How can we apply these guidelines when trying to minimize GI symptoms without compromising race performance?

5. IN-RACE NUTRITION – Energy Bars: There’s a never-ending variety of energy bars in the market, what would be the optimal nutrient profile of an energy bar during a race? Is the bar texture important?

6. IN-RACE NUTRITION – Energy gels: Gels seem to vary a lot in osmolality. Do you believe that going for hydrogels rather than more dense types of gels can make a difference in their tolerance or are there any other factors to take into account such as CHO ratio (GLU:FRU)?

7. IN-RACE NUTRITION – Energy Drinks: How can the drink nutritional composition and CHO concentration can affect digestibility? Is there any benefit is new comercial formulas that claim to be able to encapsulate CHO molecules being able to provide a high concentration of CHO in a drink without compromising GI comfort?

8. How could glutamine supplementation eventually help mitigate GI symptoms in athletes? What results did you find with your research and whats the applicability of them?

9. Posible role of Probiotic supplementation in preventing the appearance of GI symptoms in athletes and their current limitations.

If you want to keep up with Dr. Jamie’s Research:
Twitter: @pugh_jamie