“You need it to recover the muscles, they say”

But what does “recovery” means? Aren’t we perhaps confusing it with refuelling?

Protein is beyond question the most loved macronutrient in the sports world. It has a huge popularity amongst both professional and amateur athletes. Sportspeople of training levels engaging in different activities usually use protein supplements mixed with water or milk in an urge not to miss the “anabolic window” (actually, it should be considered an anabolic yard).

But while the effects of Protein supplementation on muscle protein synthesis, lean body mass, body composition maintenance and satiety are well stablished, little (or much less) is known about the effects of adding protein during endurance events, or even its effects on post exercise supplementation.

“But… But… Protein helps you recover doesn’t it? If it helps increasing lean body mass, it must also be good for cyclist right? I mean, look at all the added BCAAs to gels and sports drinks; look at RECOVERY DRINKS that have protein and carbs. They must be there for a reason”

Does it ring a bell?

You would be surprised to know that the bases for current recommendations of protein to endurance athletes may have been influenced from “hypertrophy-centered” research or focused on strength based activities.

To the best of our knowledge, no study has systematically determined the dose–response characteristics to protein ingestion following endurance exercise. There many studies stablishing dose-response between protein supplementation and gains in lean body mass and strength (check out this review for more detail), but there is a disturbing absence of research on protein requirements for endurance athletes such as cyclists and we keep on assuming that cyclists needs are the same as the one’s from a Rugby player.

But don’t get the wrong idea. Protein intake and protein supplementation have its unquestionable place in most athletes’ diets, including cyclists’. The problem is that we might be confusing REFUEL, which refers to the replenishment of glycogen stores, with RECOVER, which is a very ambiguous term that usually refers to the ability to meet or exceed performance in a particular activity through normalization of physiological functions after an exercise bout.

This is what motivates this post. Let us talk about protein for cyclists and differentiate refuel from recover (and from protein synthesis as well).

Let us go straight to the point. Endurance based sports (e.g. cycling, running, trail) are different from strength based exercise (e.g. Rugby; Weight Lifting) in their metabolic demands.

One often presented argument to justify protein and/or amino acids (AA) supplementation during endurance exercise is that endurance athletes oxidize significant amounts of AA during training or competition. This is partially true since leucine seems to be oxidized at some level during endurance exercise (isoleucine and valine as well, but at much lower proportion). Leucine oxidation appears to occur at a rate of 8 mg/kg/h in endurance athletes performing low-intensity exercise (60% of VO2 max), which may correspond to a total of 1.68g over the course of a 3h period for a 70kg rider. This amount of leucine could be achieved by eating approximately 77g of beef, 440ml of milk or three large eggs.

This leucine oxidation reliance during exercise seems to be even lower in women compared to men (figure 1.), probably due to an improved reliance on fat as a substrate for energy during exercise. 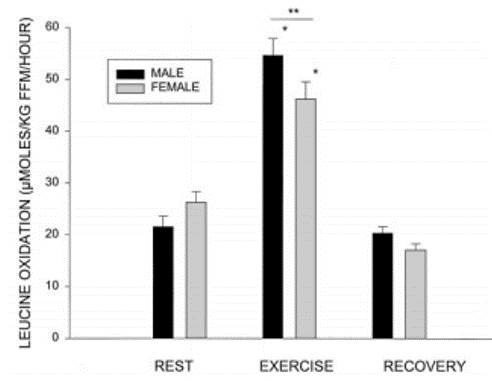 Nevertheless, it has been known for a while that endurance training lowers the activity of a somewhat important enzyme for branched-chain amino acids (BCAAs) oxidation. Its name is branched-chain ketoacid dehydrogenase (not a very creative name) and its role is to control the rate of Amino acid oxidation during exercise. We know that endurance exercise appears to blunt the activity of this enzyme, reducing leucine oxidation, which suggests that endurance training might make the muscle less dependent on amino acids as an alternative source of fuel.

A recent study performed during a training camp of the Danish National Cycling Team (figure 2.) showed that when adequate CHO is provided, added PRO (~65g during/following cycling training) does not seem to promote any performance improvement nor did it influence markers for muscle damage, stress, and immune function. 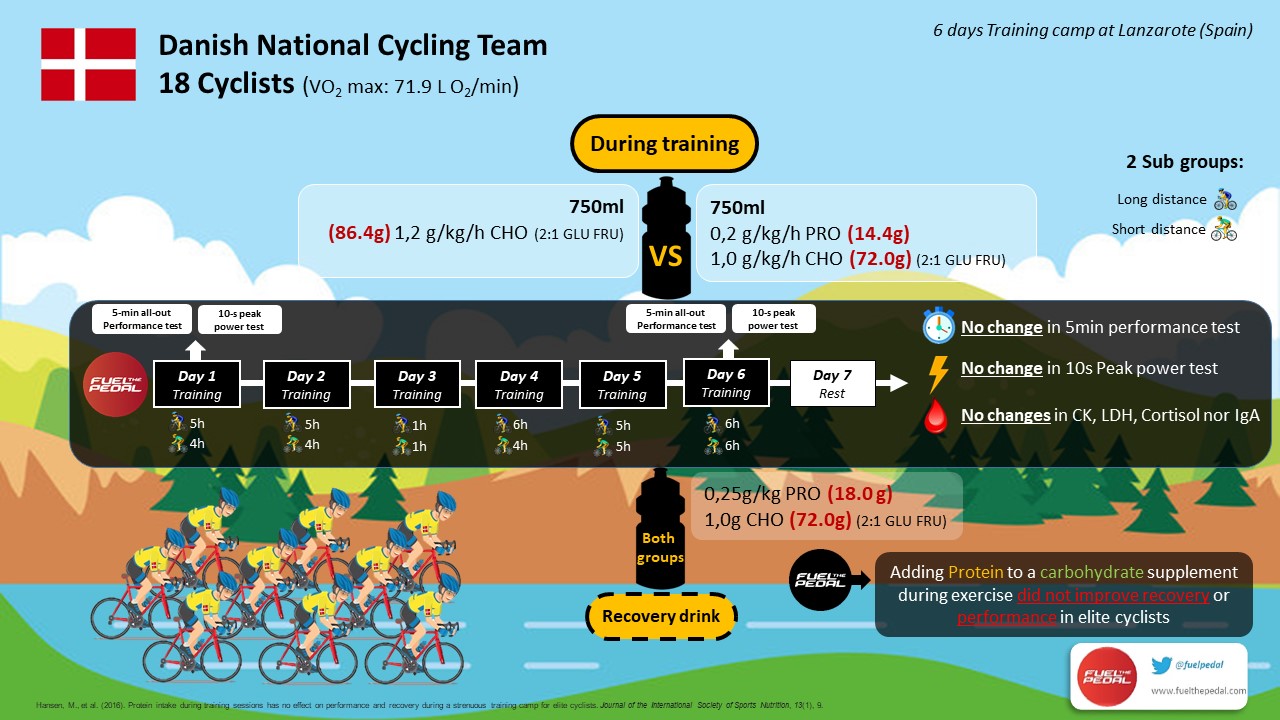 Another similar study performed by Canadian scientists Van Essen & Gibala (2006) had trained cyclists ingest a CHO drink at a rate of 60g/h and performed an exercise protocol similar to a real life condition. The subjects simulated an 80 km TT (Time-trial) and ingested drinks that contained 6% carbohydrate (CHO-only), 6% carbohydrate plus 2% protein (CHO-PRO), or a sweetened placebo (PLA) at a rate of 1 litre. Both CHO-only and CHO-PRO were superior to placebo but not different between then. Other similar investigations providing reached similar outcomes, even with ~67 g EXTRA protein during/following exercise. (Not enough evidence? Here’s another one)

Again, this reinforces the idea that when adequate amount of CHO is provided to athletes, added PRO has no additional effect on performance.

However, considering at the current panorama in sports nutrition supplementation, specifically BCAAs “obsession”amongst athletes, coaches, supplement sellers and other misinformed folks who read “stuff” in the internet, it becomes important to shed some light on this matter.

Let’s get this party started!

Recent reviews and meta-analysis have been performed on the effects of BCAAs supplementation in the effects on markers of muscle damage and DOMS (Delayed onset muscle soreness).

In one recent review, only highly BCCAs intake above 200mg/kg/day (14g for a 70kg subject) for a period of 10 days, was effective in reducing muscle damage but only when the extent of muscle damage was low-to-moderate. On the other hand, authors acknowledged a high heterogeneity amongst studies and a moderate risk of bias.

A recent meta-analysis on this topic found that BCCAs did not alleviate symptoms of DOMS post exercise at 24, 48, 72 or 96h, with no influence on LDH (lactate desidrogenase efflux). However, authors noted that BCAAs could significantly reduce CK (Creatine kinase) up to 24h. There is however, data from our research group from University Camilo José Cela in Madrid by Areces et al. (2015) suggesting that even though there is a reduction in total serum amino acids during endurance exercise (half-marathon in this case), these amino acid reductions are not correlated with CK levels.

A previous RCT (randomized controlled trial) from the same research group, which provided 5g of BCAAs for 7 days to marathon runners, found no effects in prevention of muscle power loss, muscle damage or perceived muscle pain during a marathon race.

In light of this evidence, there appears to be no benefit for focusing on protein ingestion during exercise, whether in the form of a complete protein source (e.g. whey) or partial amino acid formulations (e.g. BCAAs). 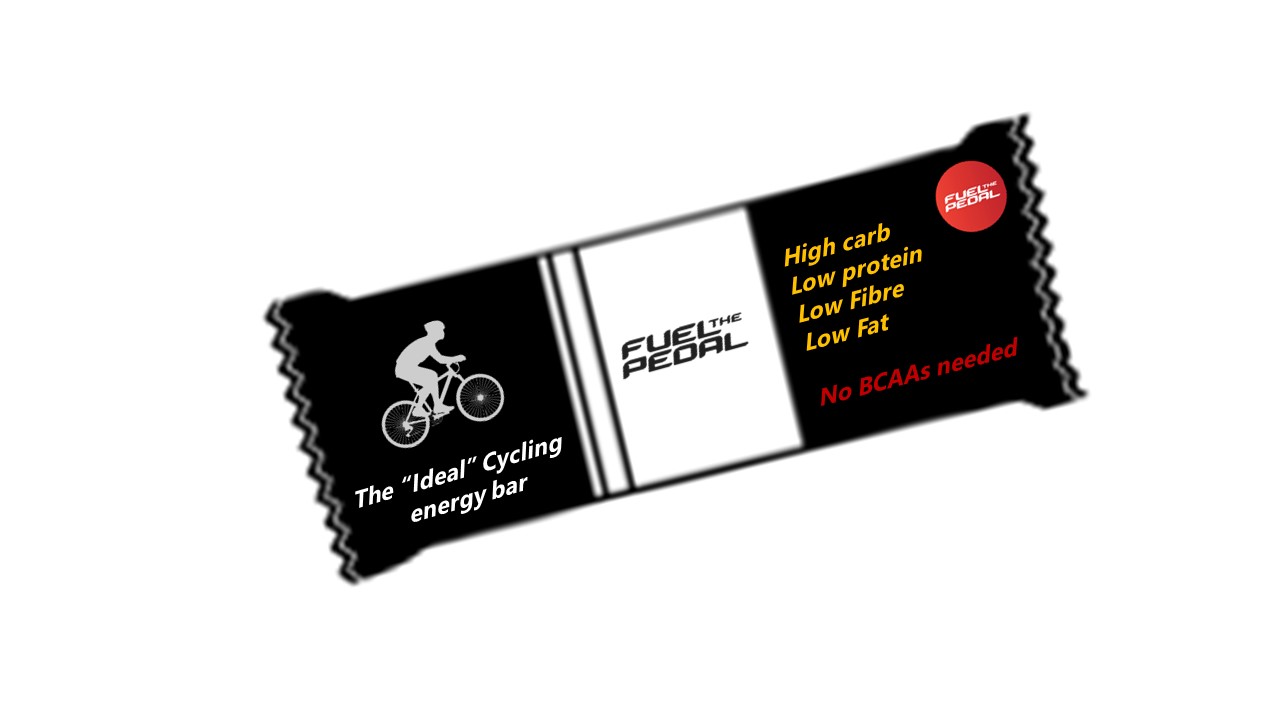 And this was also the alleged strategy that Team Sky used to fuel Chris Froome’s victory during the stage 19 of the 2018 Giro D’Italia in which his colossal amount of carbohydrate ingested during the race was complemented with negligible amounts of protein, fat and fiber during that period.

So, about that fancy gel, sports drink or energy bar with added protein or BCAAs. It seems to add nothing to your performance or recovery capacity.

It might not sound relevant for you but when you see people in amateur groups (personal observations) taking BCAA-enriched gels to attack a KOM in STRAVA, one notices the level of misinformation are we getting into.

Until further notice, the focus on protein ingestion should be throughout the day and not during your cycling workouts. During this period, carbohydrates remain the king and the main macronutrient that we should be focusing on during endurance activities.

Especially in trained athletes who are used to ingest large amounts of carbohydrate before, during and after, who have a reduced capacity for amino acid oxidation during exercise.

But ok… I understand that some of you might be asking: Are BCCAs bad, or do they impair my performance? No, they don’t seem to! If they are present in the composition of your usual isotonic drink, energy gel or bar, go ahead and keep consuming them. BUT, if they make the product more expensive or if you are taking that specific product because you think the presence of BCAAs will improve your performance, you might want to reconsider.

But how about AFTER cycling and throughout the day? 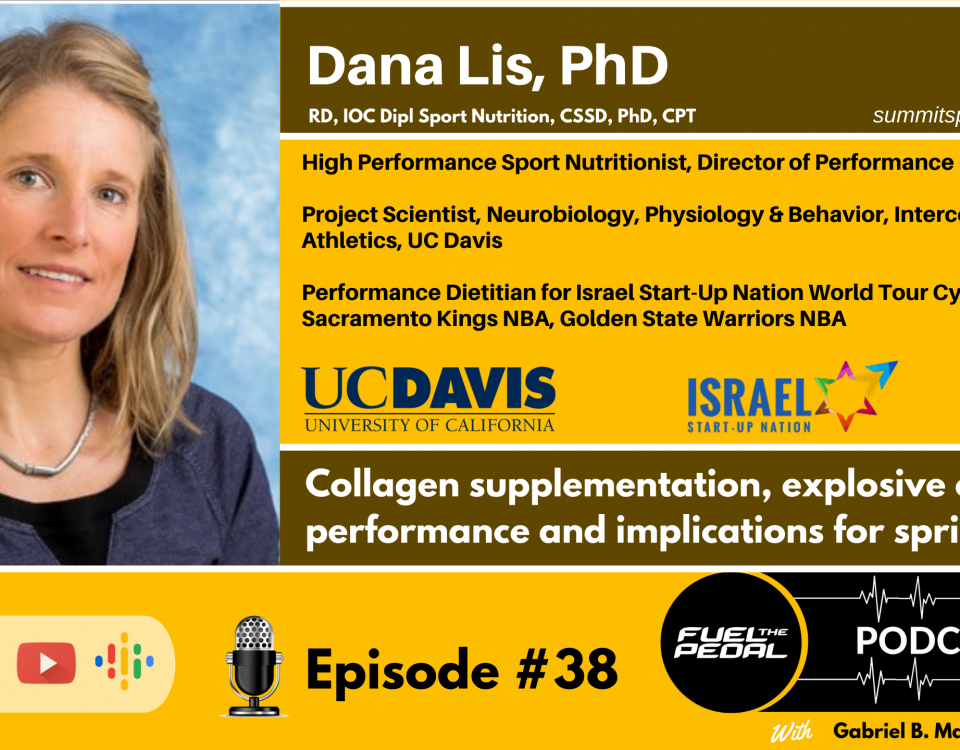