(you can read the first part of this topic here)

In a previous post, we’ve covered the importance of carbohydrate ingestion to optimize glycogen synthesis and the discrete role of protein in this process.

It is known that an adequate post exercise carbohydrate ingestion at a rate of 1 to 1.2g/kg/h in the first 4h can maximize both muscle and liver glycogen resynthesis. This may guarantee that glycogen stores are fully restored to pre exercise levels within 24h. This is of particular interest in pro cyclists engaged in competitions lasting several days in a row (e.g. tour de France where sometimes there are less than 20h to recover until the next race) and maybe not of much interest to the regular amateur athlete only engaged in a single day competition.

But how can protein ingestion be of any help in glycogen resynthesis?

If the priority is to refuel glycogen fast and cyclists don’t have enough carbohydrates at their disposal, then protein…

After a long workout or a race, the athlete may not be hungry or may not have access to enough carbohydrate and it may be difficult to make the cyclist eat whatever it is in this in the first hour.

Generally, the cyclist may be more prone to drinking. In this case, going for a carbohydrate  drink may be the best viable and palatable way of assuring that the athlete starts the refuelling process as soon as possible. We actually witness this phenomenon quite often where someone from the team staff rapidly provides a drink or shake (Peter Sagan prefers gummies) right after the end of the race (Fig. 1) and it may be common that such drinks have added protein (usually whey protein). 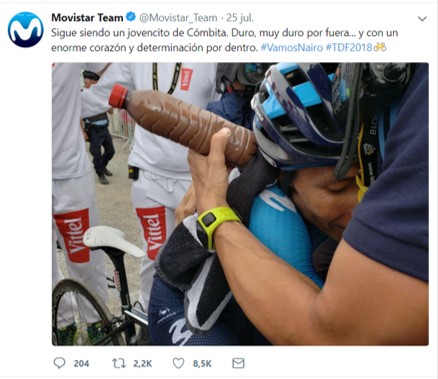 However, the addition of protein to this carbohydrate-containing drink will only have a complementary role in maximizing glycogen resynthesisif and ONLY IF carbohydrate is provided at an suboptimal dose in the critical 4h period (<1.0g/kg/h as shown in Fig. 2).

This complementary effect appears to occur through an increased insulin response resultant of the co-ingestion of protein and carbohydrate which enhances glucose uptake in the muscle via stimulation of glucose transporters.

This protein + carbohydrate co-ingestion may also be of interest to cyclists engaged in multiple training sessions a day with limited recovery times (e.g. <4h). 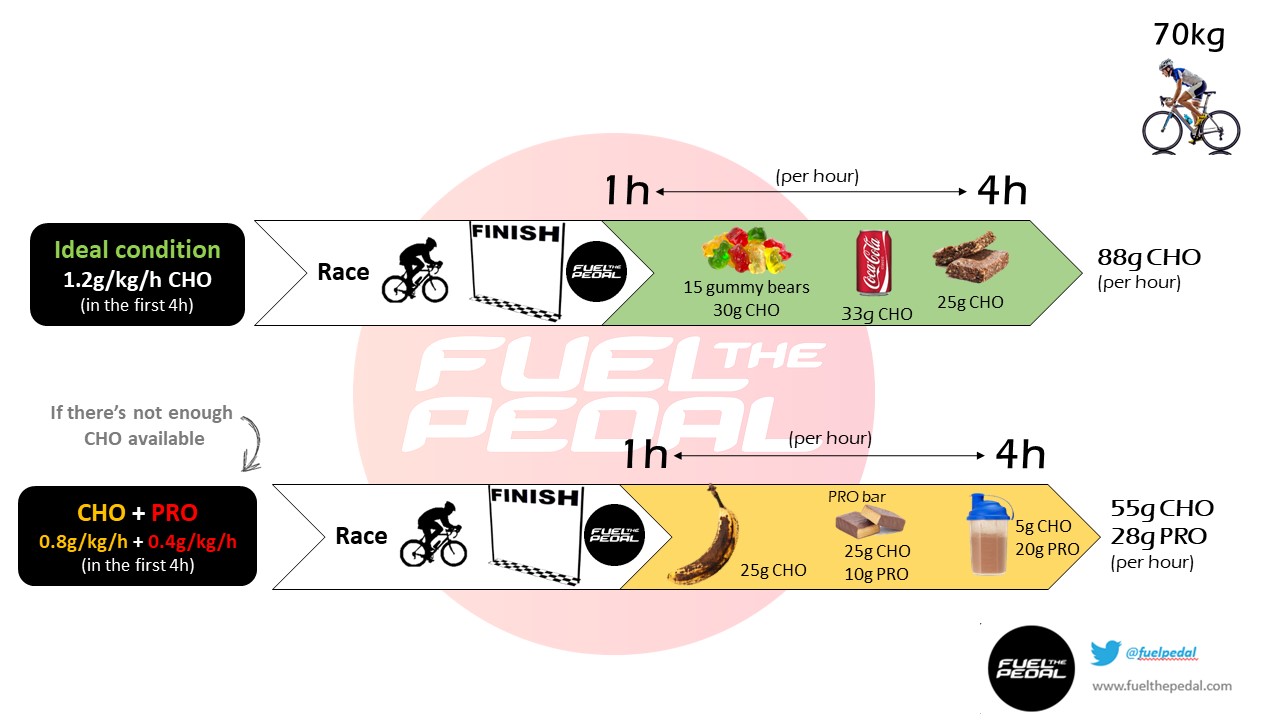 Simultaneously, protein ingestion may assist in repairing exercise-induced damage on contractile proteins through de novo synthesis of proteins, although we will get into further detail on this later in a following post on muscle protein remodelling.

If the priority is to maximize training adaptions through carbohydrate periodization, then protein…

Muscle glycogen content works as a “switch on” and “switch off” for muscle adaptations during endurance exercise. Some specific adaptations require performing long morning workouts with low glycogen reserves (< 200 mmol/kg dw) in order to increase the expression of important genes mostly driven by activation of AMP-activated protein kinase (AMPK).

For that matter, carbohydrate ingestion needs to be periodized, or in this particular case, it has to be limited/restricted in certain periods of the day (e.g. right after a high intensity workout or previous to a long ride).

One of these possible carbohydrate periodization strategies requires that carbohydrates are limited before sleep (“sleep low”) after a glycogen depleting cycling session, thus contributing to generate training adaptations during the morning session.

In such situations, the ingestion of protein in the meals where carbohydrates are limited or totally removed (in this case, both the post workout dinner after the glycogen depleting session and the following morning pre cycling breakfast) at a rate of 0.4g/kg/meal (28g for a 70kg cyclist) will not only to stimulate muscle protein synthesis (MPS), but will also sustain mitochondrial biogenesis while preventing muscle decay that may occur while training in a glycogen depleted/reduced state.

Putting things into context, 28g of protein are easily achieved in a meal for a 70kg rider (or even for in non-athletic folks). This “extra focus” on protein intake should only be taken into account in a much heavier cyclists who require more protein.

Applying some common sense to the role of protein in refuelling and recovery, it is needless to say that if a cyclist (pro or amateur) is having a big meal (e.g. lunch or dinner) in the first or the following hours following the race event, it is more than likely that enough protein is already present as part of the plate (meat, fish, seafood, eggs, dairy).

As sports nutritionists, extra care should be put on educating cyclists and coaches of the role of providing enough carbohydrate above all else during the 4h period in fractioned doses per hour (fig. 2) and not concentrating everything in just one big meal.

Nevertheless, we must be aware of the differences between a professional cyclists who needs to recover fast and probably spent much more energy during the ride and the typical amateur average rider who doesn’t spend much energy, usually has a post racing/training environment prone to eating and drinking (usually overeating) and who probably shouldn’t be worried about supplementing or be especially worried about not meeting protein needs (figure 3.). 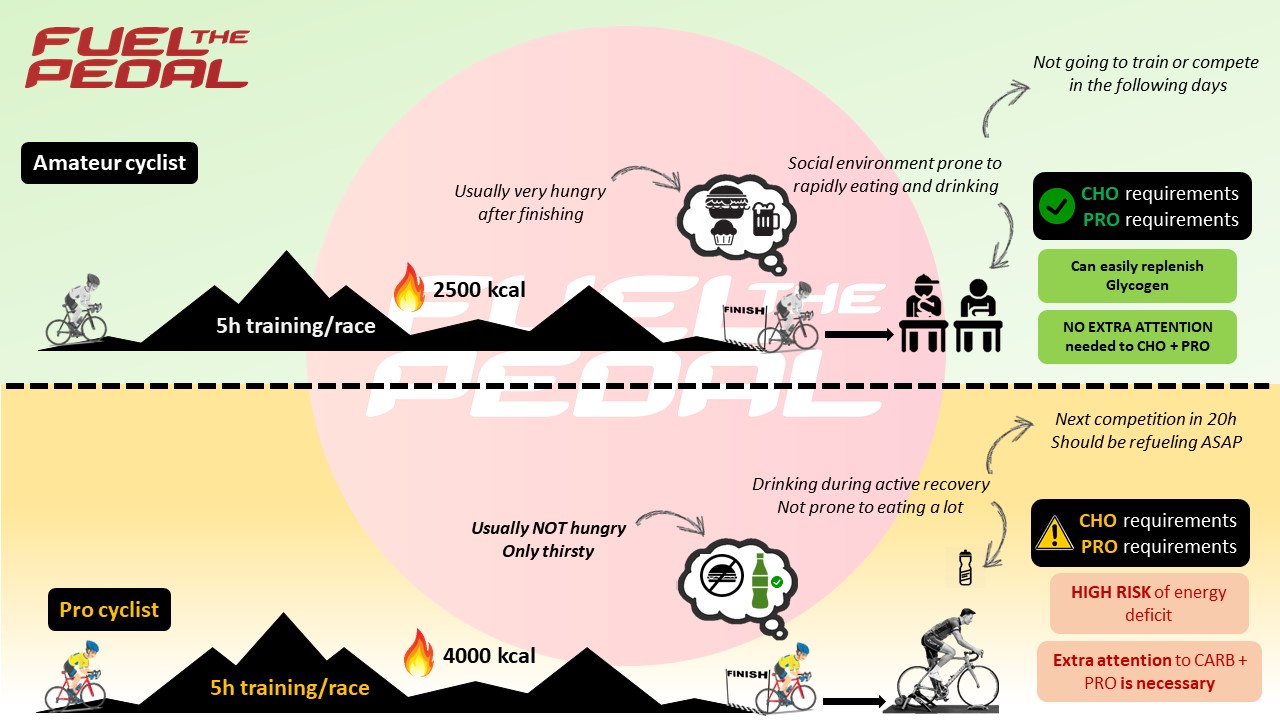 Therefore, it might not be necessary to put extra focus on protein in such situations.

In the following hours post-race or a hard workout, if not enough carbohydrate is available, strategically including sources of carobhydrate + protein in multiple fracioned snacks (low fat yogurt, chocolate milk, protein bars, smoothies) until the next “big meal”, will most likely provide adequate amounts of both carbohydrate and protein for optimal muscle glycogen resynthesis.

In a following post, we will be covering the post cycling period and the role of protein for muscle remodelling. 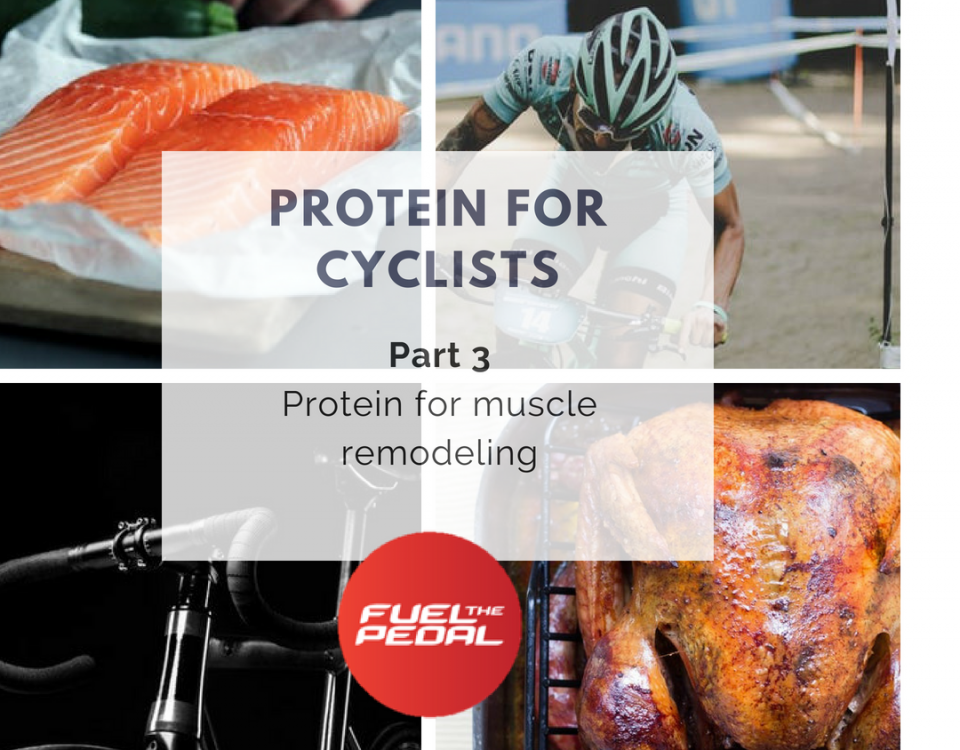