FTP #1: Javier Gonzalez – Breakfast for Cyclists: Should they deplete before they eat?

Let eu start this post with one simple question:

Is there significant muscle protein synthesis (MPS) during cycling workouts that justifies an intake as high as the recommended intakes for resistance exercise?

But how about endurance exercise such as cycling?

Is there enough MPS to justify higher protein intakes?

Are there other factors such as Leucine oxidation and mitochondrial biogenesis during exercise that might justify a focus on protein in these athletes?

The SHORT ANSWER to all the question above is, YES, THERE IS.

Introducing a bit of boring but necessary theory on this:

Posterior works seemed to point in a similar direction, showing that Akt-mTOR appears to be activated by 7-week endurance exercise training, enlarging both type I and type II fibers.

Therefore, there seems that endurance-type exercise can stimulate the signaling for MPS, but training status might influence the degree of said stimulation.

Running can stimulate muscle protein synthesis largely than cycling, this latter still has a considerable contribution. This, along with the greater mitochondrial protein synthesis observed with simulated cycling bout, might seem enough to justify increased protein requirements for cyclists in order to promote training adaptations and support MPS.

So far, we know that protein ingestion after endurance exercise increases MPS, probably to assist in muscle remodelling mechanisms.

But, how much protein would be enough to promote this effect?

Early studies on this matter found that 10g appeared to be barely enough to increase myofibrillar MPS after endurance exercise at some level, while later on it was found that the effect of co-ingesting 25g of carbohydrate with 10g of protein could further stimulate myofibrillar MPS in aproximatly ~35% (although not affecting mitochondrial MPS) in trained cyclists.

Nevertheless, emerging evidence points out to the possible role of leucine composition, since ingesting 23g of protein (containing 5g of leucine) in the first 90 min after cycling can increase MPS in 33% when compared to a 15g leucine supplement and a carbohydrate drink (all isoenergetic). Leucine ingestion also appears to mediate the “so much sough muscle fibre recovery effect” (that is usually confounded with refuelling) modulating inflammatory-myogenic regenerative processes. This appears to improve recovery in trained cyclists allowing them to perform better in subsequent workouts.

So, focusing on leucine-rich foods, especially in the liquid form, which can make post cycling protein ingestion more convenient, palatable while also hydrating the cyclists, might be the ideal strategy to promote optimal “muscle recovery”. This can be achieve by ingesting dairy-based foods such as liquid yogurt, dairy-based ice creams, chocolate-flavoured milk that can also form the base of dairy based smoothies. Adding powdered protein supplements such as whey, casein or soy can be conveniently added to enhance its content in leucine.

Does this means that we should give extra attention to protein intake/supplementation immediately after a cycling workout? Or should we focus on total daily intake?

These interesting yet preliminary data seem to point in the direction of the complementary role of leucine-rich protein on muscle recovery in order to allow cyclists to resume their workouts as fast as possible. Still, we need more research to be done in order to stablish optimal protein/leucine recommendations for endurance-based sports.

What we do know is that protein might have a complementary role, whenever carbohydrate intake is not optimal (<0.8 g/kg/h in the first 4h) and that for optimal muscle fibre recovery and MPS, maintaining a positive nitrogen balance through control of daily protein intake instead of timing might be a more important factor.

In the resistance exercise realm, growing evidence on the effects of protein supplementation pre- VS post-workout in myofibrillar MPS in resistance exercise, have been consistently showing similar effects when both approaches are compared.
This has been increasingly leading to the recognition that the interval for protein intake may be eventually longer than previously thought, lasting for several hours.

Rather than this, the total amount of protein intake throughout the day seems to be the most significant factor to take into account to maximize MPS.

Transferring this recommendation to the cycling realm, one could aim to provide 1.6 to 1.8g/kg/day of protein fractioned in 0.4g/kg/meal, focusing on high-leucine content (Fig. 1) 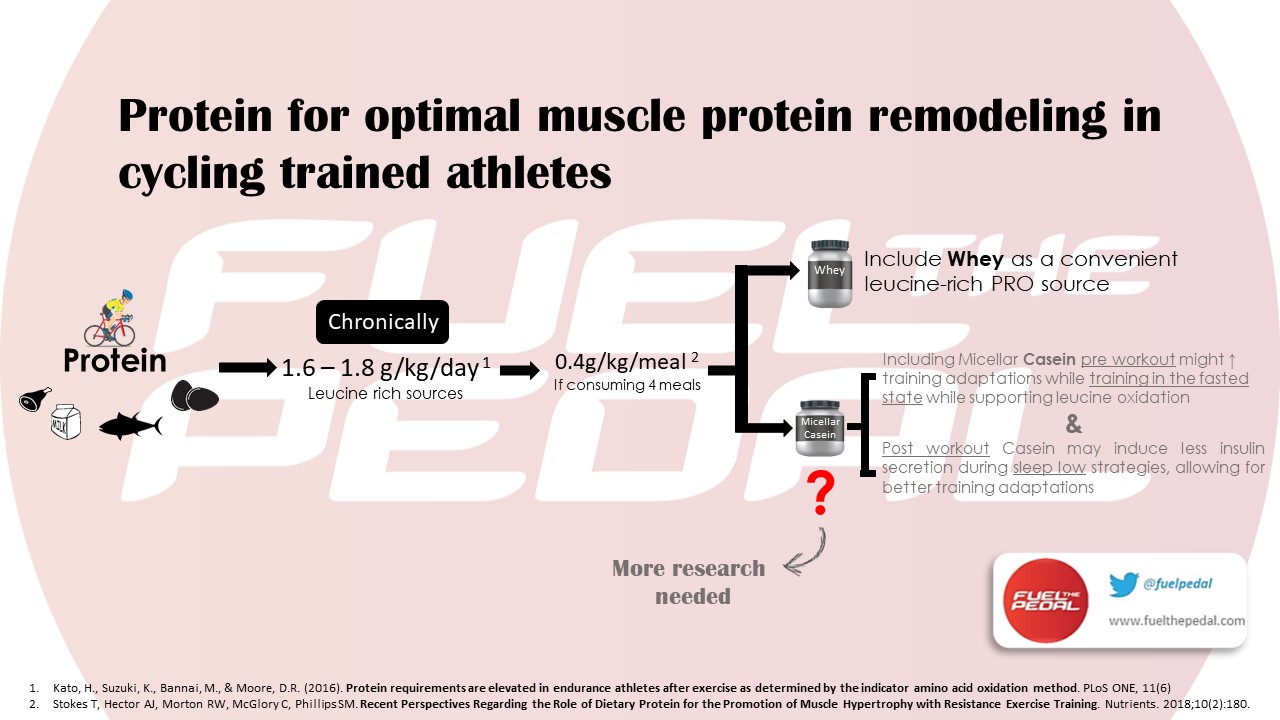 Training adaptations such as increased mitochondrial biogenesis and capacity, increased muscle glycogen and an increase in enzymes specialized in glucose uptake in cells such as GLUT4 and hexokinase II are thought to be partially mediated by an enzyme called AMP-activated protein kinase (AMPK). Put simply, AMPK is inhibited (amogst other factors) by insulin secretion.

It is theorized that in “training-low” specific situations where the objective is to promote greater training adaptations through limiting carbohydrate ingestion (e.g. “sleep low” – restricting carbohydrate ingestion at dinner, after a glycogen depleting session), in order to induce the activation of AMPK, ingestion of some low insulin-secreting proteins such as casein, might allow for this enzyme’s signalling to be reduced.

Both carbohydrates and protein have the capacity of elevating insulin after ingestion, the latter at different rates according to its leucine content. In this context, the high insulin secretion observed after the ingestion of whey and soy proteins, through stimulation of the mTORC1 pathway and consequent inhibition of AMPK pathway, would “in theory” contribute to modulate training adaptation responses while inhibiting AMPK signalling.

When ingested, whey proteins have a rapid impact on insulin secretion, faster than micellar casein, which coagulates in the acidic gastric environment and transits more slowly.

Any research on this topic?

Not much research has been performed on this subject.

The only study specifically studying the effects of protein ingestion in a “training low” phase used a methodology of supplementing casein hydrolysate 45 minutes before, during and immediately (20g, 10g and 20g respectively vs. tasted matched non-calorie placebo) after an intermittent cycling exercise.

Subjects performed a glycogen-depleting protocol the evening before.

Measures of AMPK and PGC1-mRNA, were both unaffected by casein ingestion which points out that athletes engaging in “training low” phases, may consume protein before, during or after without worrying about the type of such protein.

It would have been interesting to compare the casein effects with whey, soy or non-hydrolysed casein in order to observe differences amongst them.

Nevertheless, it remains clear that the main stimulus for AMPK activation appears to be training in the low glycogen state. Therefore, the above mentioned theorization requires more research in order to be validated. For the moment, whey and casein protein remain as convenient, leucine rich sources of protein that can be a part of the cyclists diet with a singular role in complementing training phase performed with low glycogen stores.

Cycling is a tremendously demanding sport where fuelling to maintain high intensities is important, but maximizing refuelling and restoring muscle functional capacity can be as important.

Although some evidence points out that cyclists might benefit from protein supplementation post workout, total protein and calorie intake appears to be the most important factors when it comes to promoting positive adaptations exercise.

Protein appears to be able to confer an ergogenic advantage only when subjects are in a negative nitrogen balance (fig. 2). The impact of protein timing on muscle recovery and muscle soreness appear to be minimal, similarly to its effects on muscle hypertrophy. 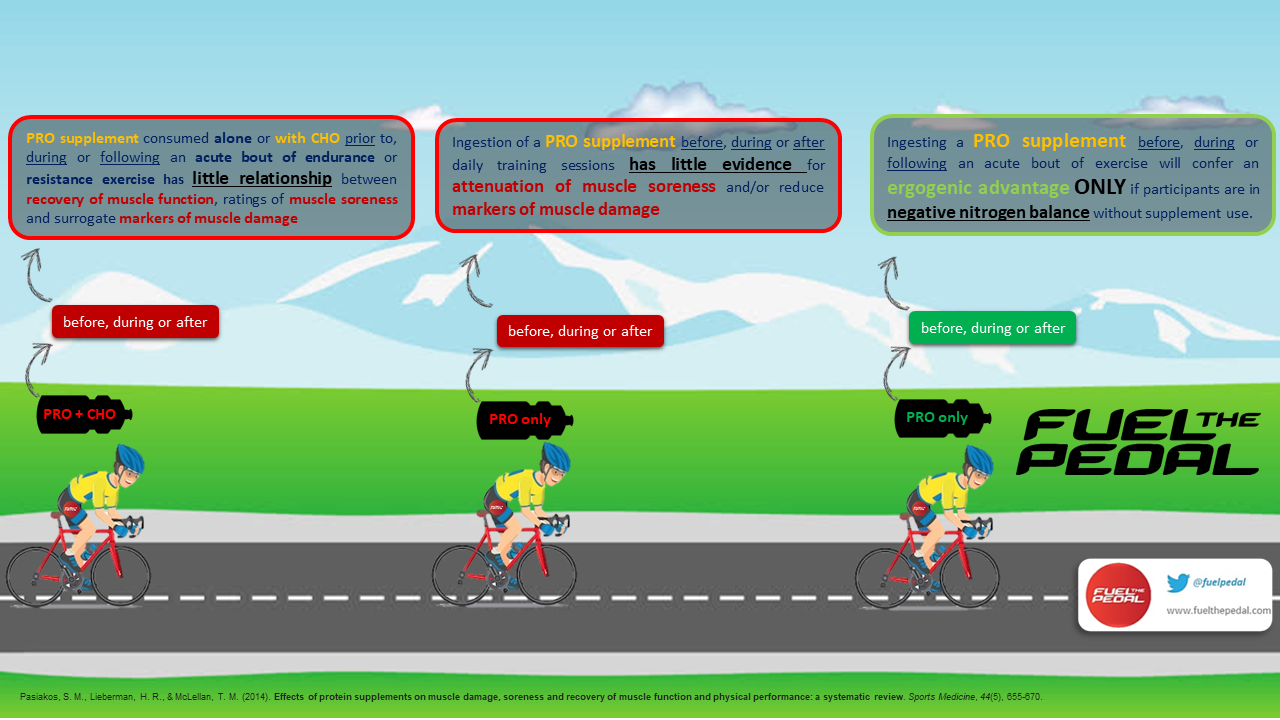 How much daily protein then?

Based on current research, trained cyclists should aim to try to ingest protein in the range of 1.6 to 1.8 g/kg/day in order to support muscle function and create an optimal environment for training adaptations.

In some specific situations such as intensified training or training with low glycogen availability, increasing protein intake up to 3.0g/kg/day (vs. 1.5g/kg/day) might modestly attenuate performance declines that may occur during specific training periods. However, team nutritionists should take into account that additional dietary protein intake should not be at the expense of achieving adequate CHO goals, which are essential if an athlete aims to maintain training quality (i.e., intensity) and performance.

According to recent data, severe energy restriction, dietary restraint, and disordered eating behavior are still common in professional cycling, which highlights a much-needed role of sports nutritionists on cycling teams.

Team nutritionists’ should pay attention to provide enough energy to cyclists engaging in long workout sessions, putting the “spot light” on carbohydrate intake if the priority is to refuel fast, or periodize carbohydrate if the priority is to generate training adaptations. In this latter condition, nutritionists should put extra focus on protein intake in order to sustain a possible decrease in performance or lean body mass.

Global Summary of Protein requirements and supplementations for cyclists 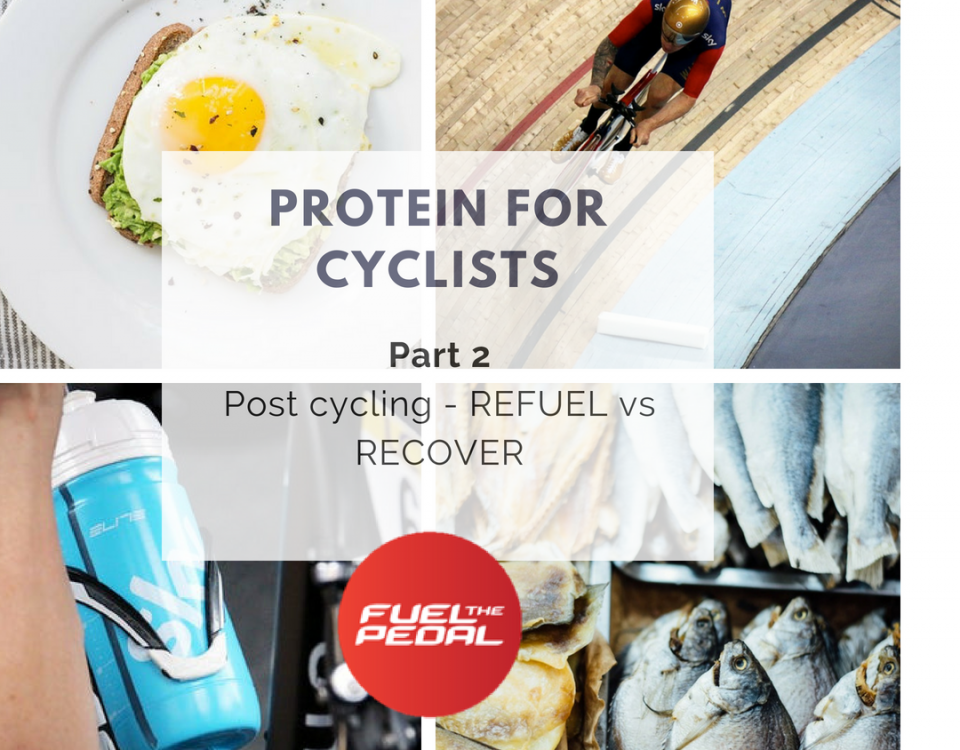